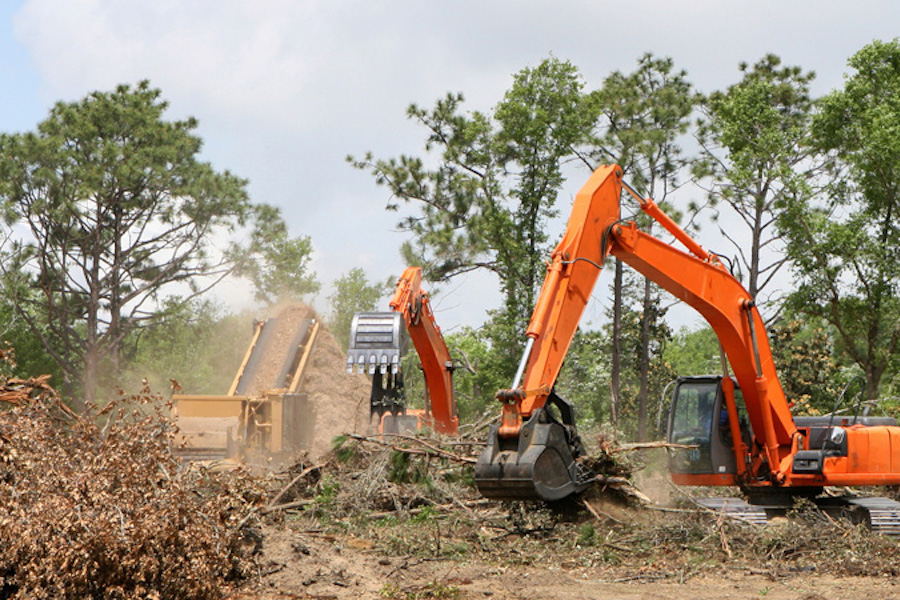 02 May Other options for treating slash after a timber harvest

Posted at 00:00h in Blog by dceclarity

Slash is the term used to describe the treetops, limbs, and other woody material left behind after a timber harvest. The amount of slash left behind will depend on several factors, including the size and quality of the harvested trees. Universally, how the slash is dealt with is an important consideration in the logging process. Heavy amounts of slash left on the ground can be a fire hazard and it makes tree planting more difficult and more costly.

Piling and burning is the most common method of slash treatment nowadays. However, some landowners are looking for alternatives to burning for various reasons. Pile burning can be challenging due to weather conditions or smoke restrictions. When logging contractors are busy, they may be reluctant to include pile burning in their contract due to the time involved, leaving it up to the landowner. And, there are greenhouse gas considerations with a burning slash. For all of these reasons, it is worth looking at the pros and cons of other methods of slash treatment.

Some landowners choose to pile the slash, but not burn the piles. This is acceptable, but very large piles will result in an equally large area that cannot be replanted. If you do not wish to burn, you may want to specify in your contract that slash piles should not exceed a certain size. Smaller piles will break down faster and will not leave large, unplanted gaps. All kinds of small wildlife may also use the piles for shelter. Slash can also be pushed into rows rather than piles.

Mastication treatments use mechanized equipment to break down woody material into smaller pieces and distribute them on the ground surface. Any number of small machines with various cutting head attachments can do this work. They drive passes over the area, masticating the material in their path as they go. These machines are more efficient in unpiled slash, so you would want to consider this ahead of time when negotiating with your logger about whether the slash is to be piled.

There are several companies in the region offering these so-called “forestry mulching” services. You can find some listed in the Oregon Forest Industry Directory under Forestry Services (land clearing/site preparation). Compared to piling and burning, the cost of mastication is probably equal or greater, depending on the terrain and the amount of material to be treated. If you want to learn more about mastication, this U.S. Forest Service publication is very thorough.

Sometimes, if there is a light amount of slash, no treatment at all may be needed. This could be the case if the harvested trees were relatively small. For example, this summer I was in a small patch cut that was harvested a year ago with a processor, which strips the limbs of the trees in front of it as it works, distributing the slash fairly evenly across the site. The harvested trees were tightly spaced Douglas-fir, averaging roughly 12 inches diameter. The area would be sprayed with a site preparation herbicide mixture before planting this coming winter. The slash was left on the ground, but since the tree branches were small in diameter and fairly sparse due to the tight tree spacing, the unit appears to be plantable without any slash treatment. Additionally, the slash is serving to suppress weed growth which will cut down on the amount of herbicide needed, to a spot application.

Harvested trees at these two sites were the same size and density. In the left photo, no slash piling was done. In the right photo, slash was piled. Note the difference in vegetative cover (both sites received an herbicide treatment after these photos were taken, before planting).

For comparison, in an adjacent patch cut, the slash had been piled and will be burned this winter before planting. Here, the herbaceous vegetation had come in thick and a broadcast spray application would be needed (above right photo).

Biochar is a charcoal product made from burning wood or other organic material in a controlled, contained environment. The process results in a product that can be applied as a soil amendment in agricultural settings, and produces far less carbon emissions than open pile burning. Biochar could be a wave of the future, but currently it is not an off-the-shelf option for slash treatment at large scales. DIY biochar kilns can be made from plans available on the internet, for those interested in trying it out on a small scale.

In summary, it’s a good idea to anticipate the amount of slash that your timber harvest will generate ahead of time, and consider your options for treating it. Talk with your logger if you’re unsure. Your logging contract should definitely stipulate what the logger is expected to do in terms of slash treatment.